We started today by driving from our Air B&B in Pahala to a parking spot for Papakōlea Beach (commonly known as Green Sands Beach).  This was a 5.5 mile roundtrip hike and although it was not a particularly hard hike, the ground was muddy in places or covered with volcanic ash and uneven, and the winds were very strong.  The whole way there we were walking into the wind. When we started the hike early and there was only one other car in the parking lot when we arrived. As we hiked toward the beach and the time got later, we were passed by many sets of younger more energetic hikers. 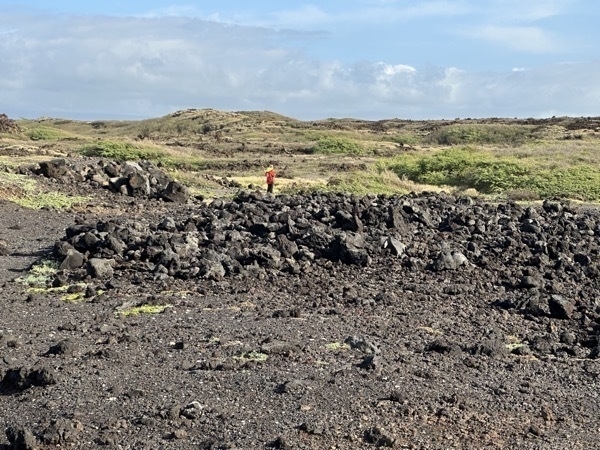 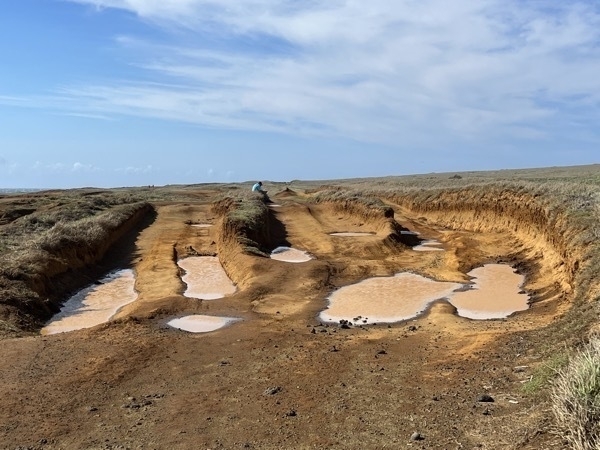 This is the point where Tom had to stop and rest and I continued hiking alone. 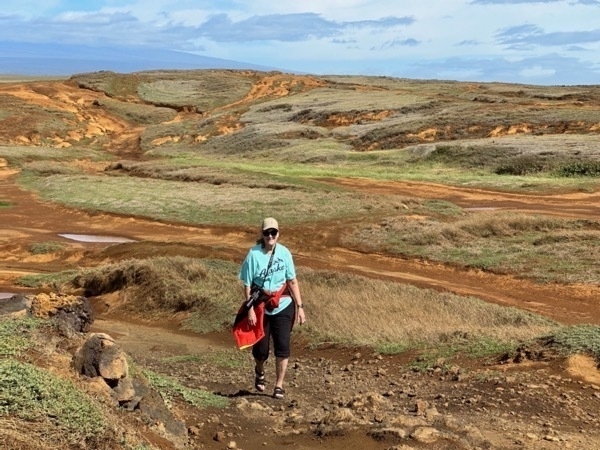 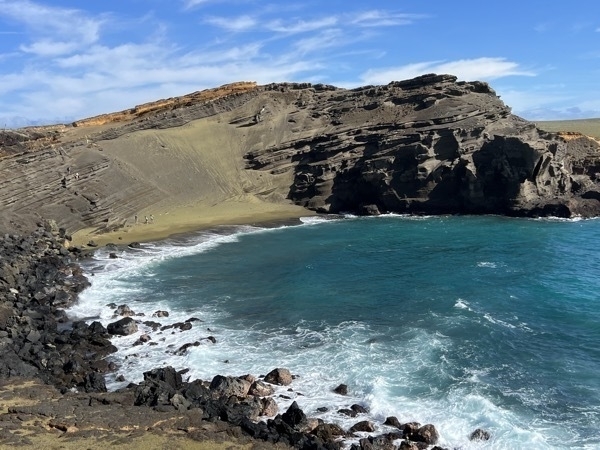 This is the Green Sand Beach which gets its name from the green olivine crystals that make up the sand. The crystals come from the cinder cone next to the beach which was formed during an eruption 49.000 years ago.  Notice how steep the decline is to the beach.  Since Tom had to stop hiking about a mile before the end and I was by myself, I didn’t even attempt to go down that steep hill onto the beach.

After we walked back to where we parked the car we realized there were pick up trucks giving rides there and back (illegally).  If we had known that at the beginning, Tom would have hiked to the beach and paid the $10 for a ride back to the parking lot (I probably would have too). 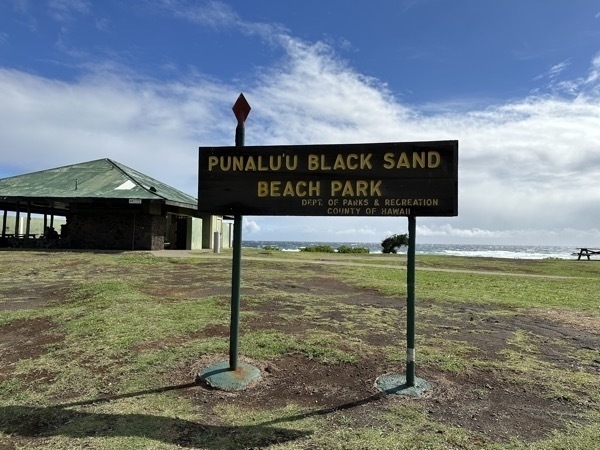 Our next stop was a Punalu’u Black Sand Beach Park. The black sand is made of basalt and created by lava flowing into the ocean which explodes as it reaches the ocean and cools. An unexpected discovery when we arrived at the beach was fifteen or so green turtles. The threatened green turtle feeds on marine plants in shallow waters along the coastline. Red seaweed, a favorite food of the green turtle flourishes on the coral-encrusted rocks in the shallow waters of the bay and the turtles are found basking on the black sand beach despite the presence of beachgoers. Visitors must remain 20 ft from the turtles at all times. 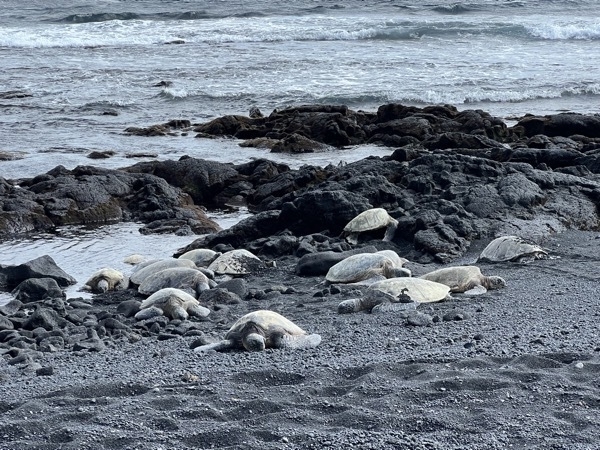 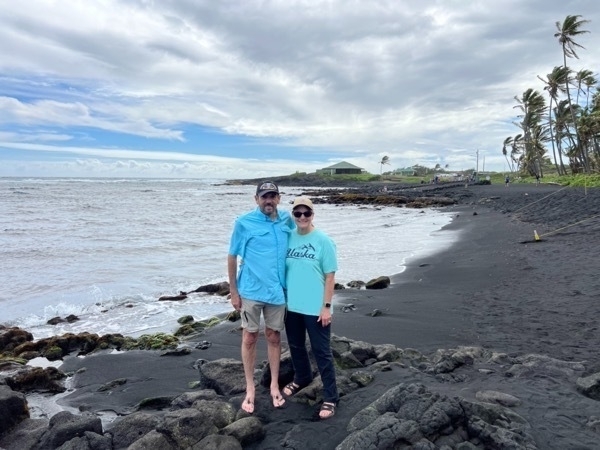 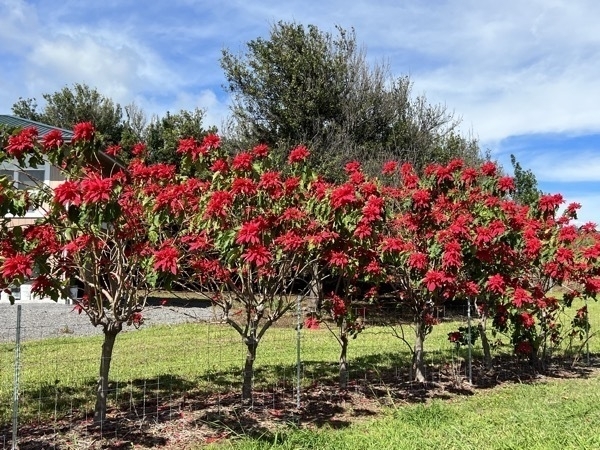 While driving from Black beach to the National Park, we passed theses beautiful poinsettia trees.

We planned this trip back in July so we could tour our 55th National Park (out of 63) and here we are! Our first stop was the Kilauea Visitor Center.  We walked across the street from the visitor’s center to the Volcano House where we enjoyed a delicious lunch. We had hoped to see the Kilauea Volcano from the big windows in the restaurant,  but unfortunately, there was a total fog out and there was nothing to see.

After lunch we drove to the Thurston Lava Tube  parking area. The Thurston Lava Tube, one of many such tubes on the island, was created by a river of molten lava. According to the NPS website, “When a lava tube is active, lava travels along its floor at temperatures that exceed 2,000º F. When the supply of lava stops at the end of an eruption, or if it gets diverted elsewhere, it leaves behind an empty cave. When this lava tube was discovered in 1913, the roof of the tube was covered with lava drippings. Unfortunately, those soon disappeared due to souvenir collectors.” 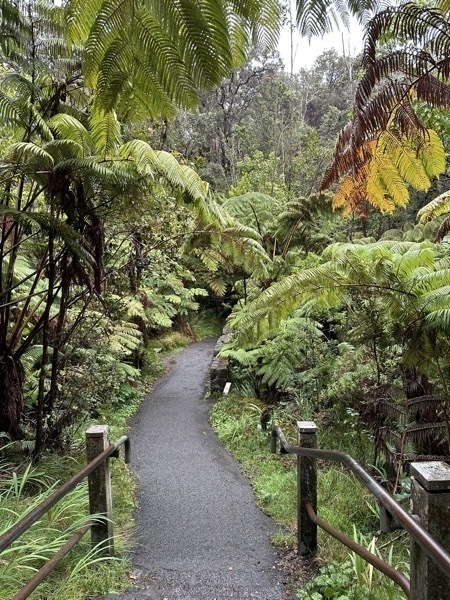 We walked down a steep path through a tropical forest to get to the entrance. 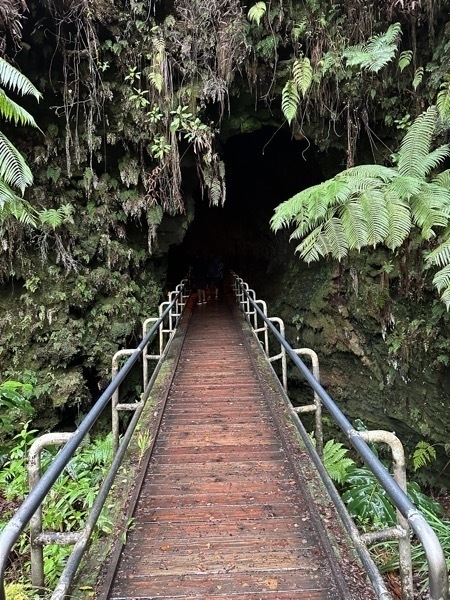 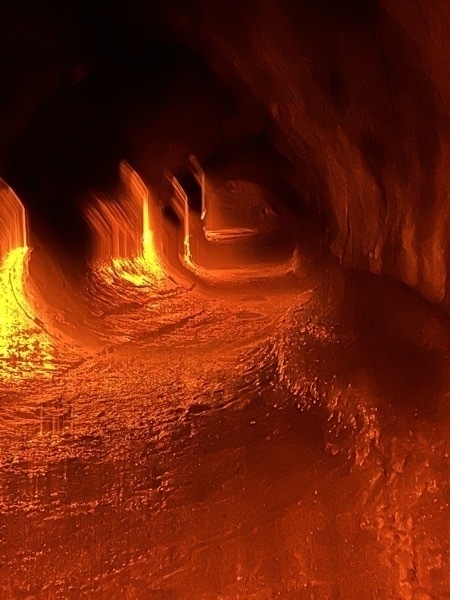 Inside the Thurston Lava Tube

After walking over 7 miles today, we were exhausted and decided to drive back to our Air B&B and take a nap.  At 7:00PM we left again to eat some dinner and then drive towards  the Mauna Loa  Volcano in hopes of seeing the lava flow.  It was 52 miles one way and took us almost 4 hours to drive there and back.  The traffic wasn’t bad until we reached mile marker 34 on Rt. 200 where we joined the long line of visitors who also wanted to see the lava flow. 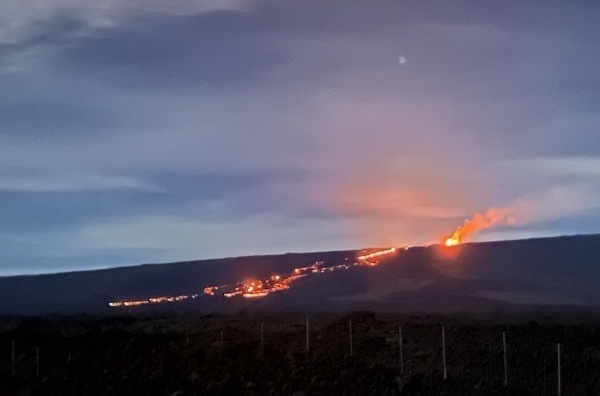 Although we didn’t have a tripod or a good zoom lens, it was very exciting to be able to see the lava flow!