We rode the Hop On Hop Off Bus over to the beautiful Titanic Museum.  The Titanic was built in Belfast and this museum is located beside the Titanic Slipways, the Harland and Wolfe Drawing Offices and the Hamilton Graving Dock where the Titanic was designed, built and launched. This fantastic exhibition has nine linked interactive galleries that outline Titanic’s dramatic story.

The six story building is designed with the bow-shaped facade of the ship with 3,000 different-shaped panels each folded from silver anodized aluminum sheets.

We also watched a movie designed by Robert Ballard about his discovery of the wreck in 1985 on the big screen which was amazing. 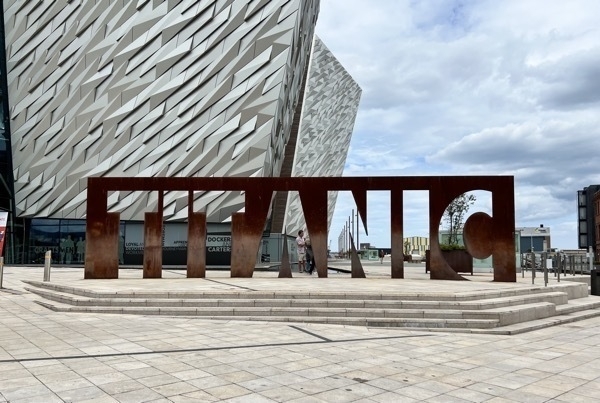 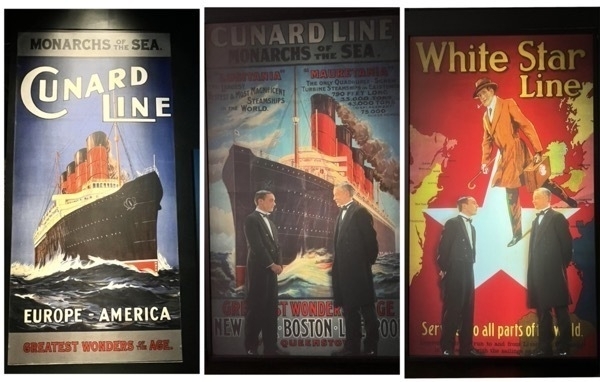 Advertisements for the White Star Line 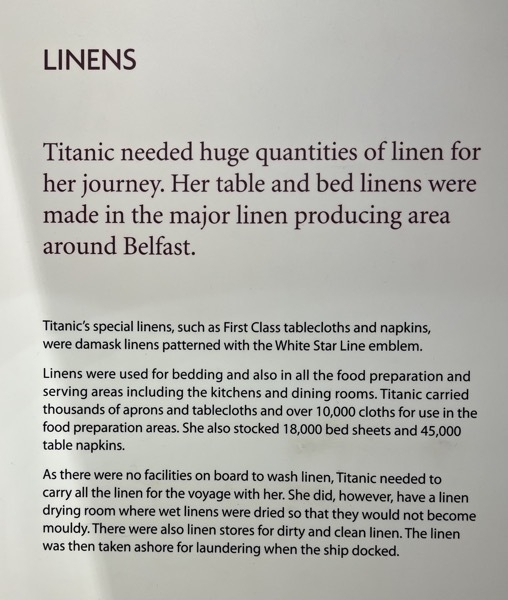 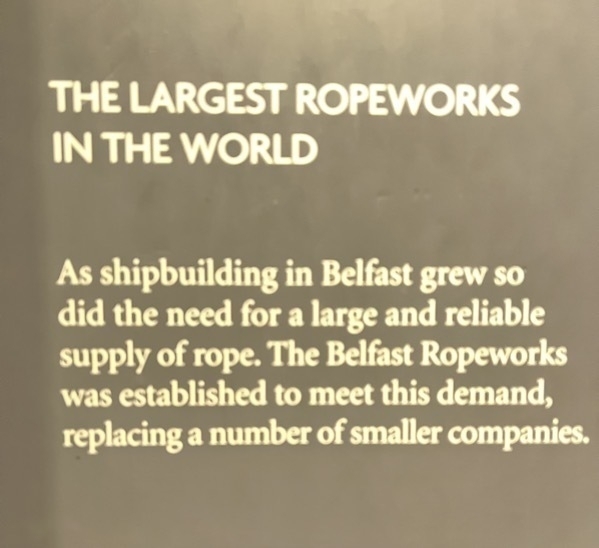 The Nomadic was used to tender the passengers who boarded in Cherbourg, France where the port was not deep enough for the Titanic to dock.  It is the only White Star Line vessel still in existence, 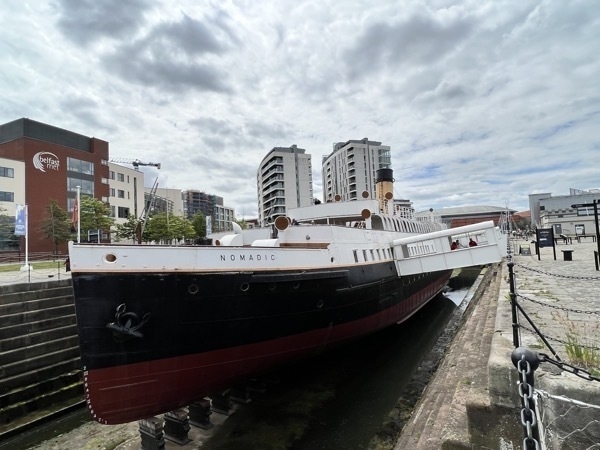 Albert Memorial Clock was completed in 1869 and is referred to as Belfast’s answer to the Leaning Tower of Pisa.  It was constructed on reclaimed land from the River Farset and weighs over 2,000 tons.  It has a vertical lean of four feet. The Big Fish, also called the Bigfish, is a printed ceramic mosaic sculpture by John Kindness.  It is 33’ long 1and was constructed in 1999 in Donegall Quay in Belfast, near the Lagan Lookout and Custom House. The Big Fish’s image appears on Belfast and Northern Ireland related tourism material.The outer skin of the fish is a cladding of ceramic tiles decorated with texts and images relating to the history of Belfast. Each scale “tells a story about the city.” Material from Tudor times to present day newspaper headlines are included along with contributions from Belfast school children. The Big Fish contains a time capsule storing information, images, and poetry on the city. 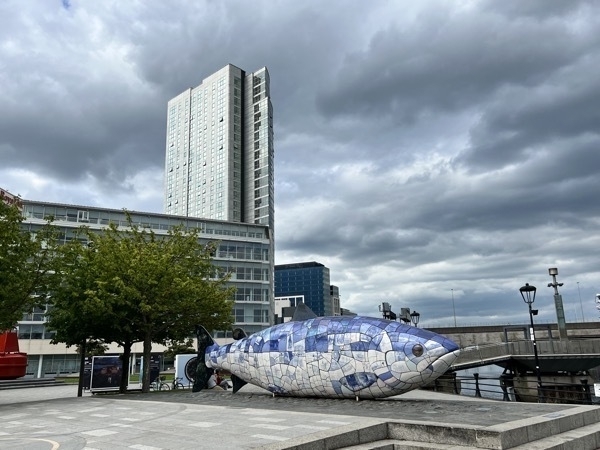 The school buses in Belfast are certainly fancier that what our school children ride in the US!

We walked from our hotel to Queen’s College where we toured the Ulster Museum. From there we walked to see Albert’s Clock and the Big Fish.  By the time we got back to the hotel we had walked 6 miles. 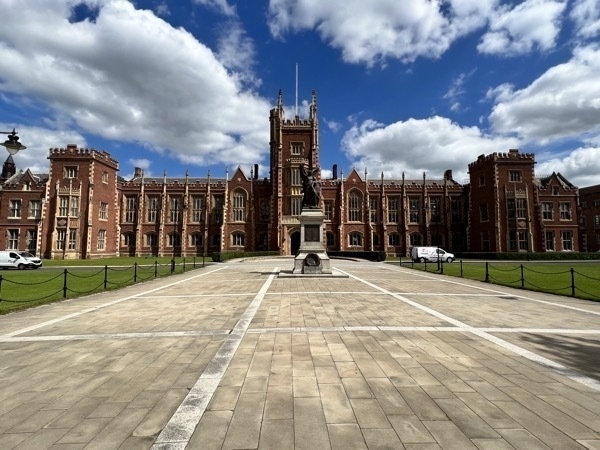 The Crown Liquor Saloon was our final destination where we ate dinner.. The Crown has  elaborate tiling, stained glass and woodwork created by Italian craftsmen who worked on the pub after hours. These craftsmen were brought to Ireland to work on the many new churches being built in Belfast at the time. 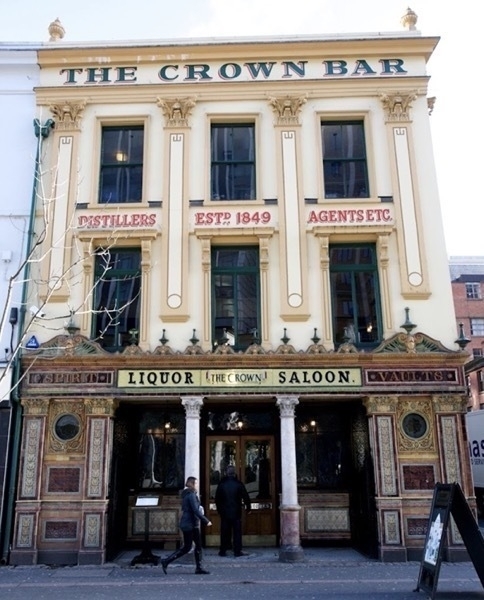 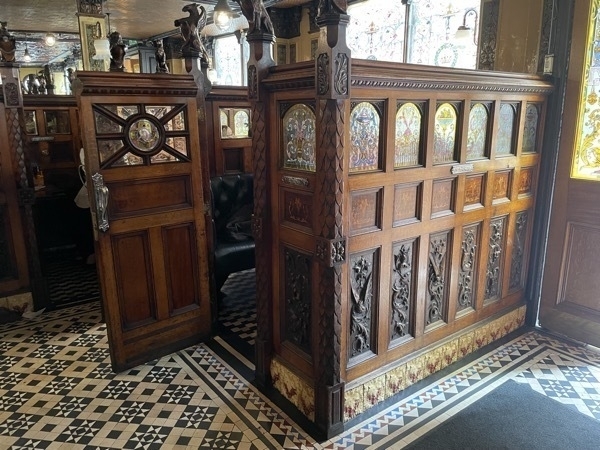 The Crown has ten booths, or snugs. Built to accommodate the pub’s more reserved customers during the .m Victorian period, the snugs feature the original gun metal plates for striking matches and an antique bell system for alerting staff. Extra privacy was then afforded by the pub’s etched and stained glass windows which feature painted shells, fairies, pineapples, fleurs-de-lis and clowns. 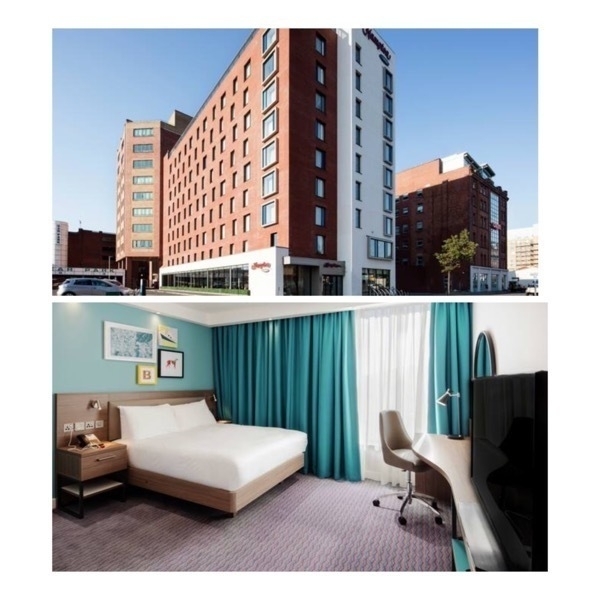 We stayed at the Hampton by Hilton Town Center the two nights we were in Belfast. It was a great location for walking to the town center and for catching the Hop On Hop Off bus.  The cost of the room included a full Irish breakfast -bacon, sausage, eggs, mushrooms, beans, croissants, yogurt, pastries, coffee and juices.